When I heard this month that we would be making our own puff pastry, I was worried. Normally when I need puff pastry I by block and roll it out (or sometimes even buy the pre-rolled versions) it’s so quick and easy. My knowledge of puff pastry was that it would be quite difficult – I don’t have a great track record with pastry at all.

However this is the whole reason as to why I signed up with the Daring Bakers to force me to try what I would never have bothered with before. This doesn’t mean however that I haven’t put this challenge off to the very last minute. 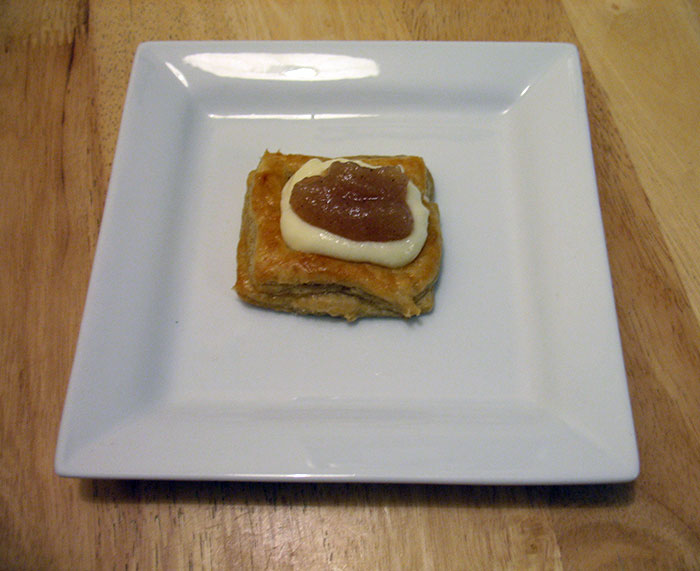 The September 2009 Daring Bakers’ challenge was hosted by Steph of A Whisk and a Spoon. She chose the French treat, Vols-au-Vent based on the Puff Pastry recipe by Michel Richard from the cookbook Baking With Julia by Dorie Greenspan.

I started making my puff pastry on Friday night, and it is a long and process but thankfully it is all mainly elapsed time. The main key to making the pastry is to keep it cold. So every step is followed by half an hour in the fridge, I have since realised that I really don’t think my fridge is cold enough. Half an hour just didn’t make much of a difference, when I left it for 6 hours it was much easier to work with.

The basic idea of puff pastry is to wrap a slab of butter in a dough, and roll it out so the butter is suspended within the dough. You then make turns, which is when you fold the pastry over itself and then re-roll. By doing this you end up with a dough that has within it hundreds of strands of butter all in parallel lines.

The height your pastry puffs out to isn’t from any raising agent, but the steam created as the water and butter in the dough heats.

Making puff pastry was fun and I think I would definitely do it again, the buttery texture was amazing. However I don’t know if I would bother making vols-au-vents again. I did a couple of things that made this harder for myself than it needed to be.

Firstly I don’t have any cookie cutters, so I had to hand cut all my shapes, this made for some fairly rustic looking vols-au-vents. But it also meant I had to touch the dough a lot more.

Secondly since I had no cutters I had to use a knife, and the knife I used was fairly blunt. Instead of cutting the pastry, it pulled it and teared at it. It was only after getting totally annoyed with it and giving up, that things got any better, if you have real problems with the pastry leave it for as long as you possibly can to cool. Then try again (I left mine for 6 hours).

The problem with vol-au-vents is that they hold no prisoners. There is no where to hide when the pastry goes wrong and rises unevenly. Next time I make puff pastry I think I will make something that is supposed to look rustic. Like a galette.

This Daring Bakers was slightly different from the others I have taken part in, in that there is much more room to be creative, than with Mallows or Dobos Torta. The filling for the vols-au-vents was completely up to us.

I chose spiced apple and custard after a lot of deliberation (which I only finalised yesterday). I wanted something that would fit into the new Autumnal season, and apples seem perfect for autumn.

Apple pie and and custard is a fairly standard after dinner treat in my family, so adding custard to the vols-au-vents first would not only pair perfectly with the apple but also give the vols-au-vent a creamy filling. 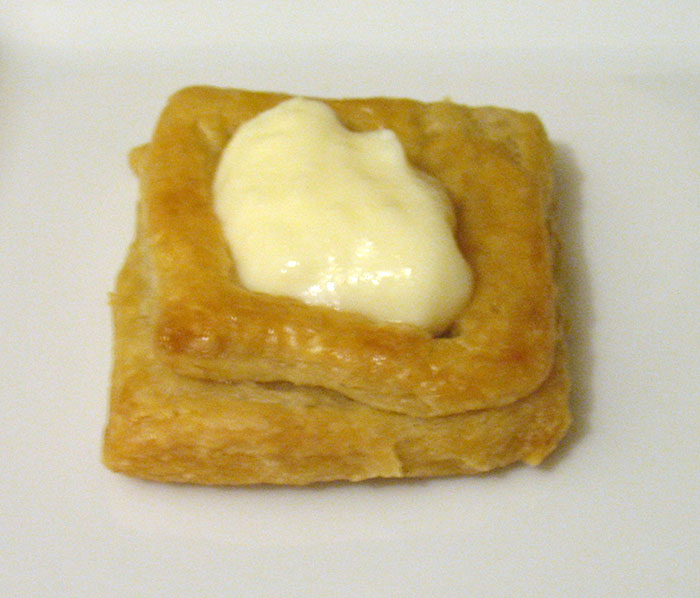 The recipes I used for the Spiced Apple Sauce, custard and finally the vols-au-vents recipe.

While I probably won’t make vols-au-vents again, I probably will try more rustic approaches to apple pie in the future (as I have in the past) and hopefully this time I won’t reach for the frozen roll of pastry.